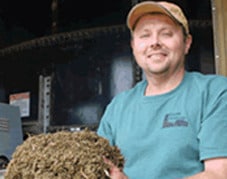 When Caine Farms purchased a TMR unit in 1990, they stored haylage in a 20 x 70 foot stave silo and relied on a top unloader that plugged into the TMR.

“We needed a faster out to get feed into the TMR. With the stave we had to unload out of the top, and this was cumbersome,” says Paul Caine, who farms with his two older brothers, Pat and Dan. “Setting up the unloader wasted time. Then you have to shovel feed out, level it off and drop the unloader.” The addition of the TMR mixer spurred the purchase of Harvestores.

“Unloading out of the bottom is nice,” says Paul. “When it is 30 below zero you just push a button. With the staves maybe after five days you might have to go up with an ax and chop feed off the walls. With a Harvestore you just climb up the hatch, fill, close it and climb down. Easy in, easy out. There is no shoveling and setting up the unloader to make sure it will run.”

The Caine brothers own and rent 600 acres of hilly ground put into conservation tillage. Crops include corn, corn for silage and alfalfa. Heifers run on 15 acres of pasture. At Caine Farms, Dan balances the ration, Pat handles all the genetics plus accounting and Paul does machinery maintenance.

The dairy was started with a dozen cows, four of them registered. There are now 210 cows and the same number of young stock — calves to freshening. It’s a commercial herd that has been AI breeding for 50 years. They use a parallel double-8 parlor built in 1995. Their DHIA rolling herd average is 25,000 pounds of milk with a 3.85 percent test, with1,018 pounds of butterfat and 762 pounds of protein. The brothers had seven 7 x 8 100-foot storage bags in 1995.

“Bags present problems. When it rains, the skid unloader sinks in the mud and it gets messy. It’s not very convenient in the spring when the frost goes out. With a Harvestore you can blow in dry feed and it keeps fine. Just push a button and they will always run,” Caine says.

He also does not have affection for bunkers. “With a bunker, feed quality suffers. There is waste and big chunks of mold get into the feed and production suffers,” he adds.

Caine says the lifetime value of a Harvestore is better when he considers the costs of bags, operating a skid steer unloader and wear and tear. “Over a 20-year period, the rate of return of investment is better on the Harvestore. You can wear out a skid steer, for bags you have to rent the machine and get rid of the plastic. Labor can be a problem fighting mud in the spring, or frost or extended rainy periods,” he says.

How does a Harvestore make a difference when handling high moisture corn? “Previously, we had to pick corn and put it in a crib or hire a combine and pay for all the gas. With a Harvestore it’s the fastest, easiest, most simple thing to do for handling HMC at 20 to 28% moisture,” he adds.

“With a Harvestore, you may end up paying a little more for maintenance, but the payback is in labor savings. With a lifetime value, you can fix any part of them,” he explains. “When we take forages from the Harvestore to the TMR it’s always consistent feed. Mold tends to affect palatability, metabolism and general health. A happy cow equals consistent production.” 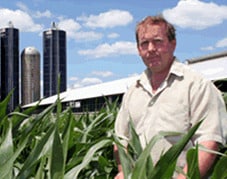 Twenty years ago Joe Hofacker had maxed out at 70 pounds of milk per cow per day. Improved genetics, working closer with a nutritionist, plus his veterinarian and better quality feed have allowed him to now consistently sustain an 80 pound per day milk production level with a herd average of 23,000 to 24,000 pounds. “Herd health has been excellent for us,” says Hofacker. “Knock on wood. Teaming superior feed, working with a good nutritionist, solid genetics and paying attention to detail keeps health problems at a minimum.

“If we didn’t have the Harvestores, we would struggle to maintain consistent feed quality which would ultimately lead to more herd health issues and less milk in the tank,” he adds. Hofacker farms with his brothers, Mike and John. Joe milks and feeds heifers, Mike milks and feeds the cows and John feeds calves and milks. They are the third generation and followed their father, John, on the 700-acre farm across a two-mile radius on which they raise corn, soybeans, and alfalfa. Their livestock inventory is 270 cows and 300 head of young stock. The Hofackers have four Harvestores, including a 25 x 80 erected in 1983 for haylage and expanded to a 25 x 95 in 1995; a 20 x 60 built in 1985 for high moisture corn and expanded to a 20 x 95; a 25 x 95 for haylage that went up in 1992; and a 25 x 95 built in 2001 for corn silage.

The Hofackers say unloading speeded up when they installed an Alliance unloader with the 25 x 95 ft. haylage unit in 1992.”It works great and feeds out fast. It’s an easy-in and easy-out equation. Haylage comes out 20 to 25 percent faster now,” Hofacker says. “The entire feeding process takes less time, there is better efficiency, less down time and less labor is needed to complete the job. When feeding, the unloader doesn’t run as long as before so wear and tear is minimized.” With the new Alliance unloader, it’s possible to put forage in with 5 to 10 percent more moisture, critical to production, especially if faced by inconsistent weather.

“The unloader handles the problem and we can also split the crop and fill two different units. I would like to have another Harvestore and have extra feed available as needed. This year hay is tight. Figuring the cost of hay versus the unit, the cost would even out in 10 to 15 years. Pulling one unloader and going into another unit can easily be done,” he says. The dairy producer has compared Harvestores with bags and bunkers. “I feel there is no comparison between bags and bunkers and a Harvestore. Why? The number one reason is waste. It’s always there with a bunker and bags,” he adds. “The cows lick up everything. When you have spoiled feed it only ends up in the manure pit.”

“A bunker needs 100 to 150 acres, much more volume, to be filled quickly and be compacted successfully. If alfalfa gets too mature it doesn’t pack properly. You run into problems and losses start to mount. A bunker requires so much time and labor to pack,” he adds.

He says Harvestores pay for themselves over the long run. “They feed out quickly and you can cut 20 to 40 acres and fill the structure immediately. If you happened to get a wetter than normal crop you can blend it with drier feed by splitting the ration between two separate units,” he says.

“With two Harvestores and a loader it’s possible to mix and match feed sources, especially if a crop has been rained on or has too high of a moisture content. Running a test on the feed can provide a good fix on what kind of feed is coming out at a particular time. If it’s subpar, we can immediately switch it to young stock and come back with better haylage for the milking herd,” he explains.

Hofacker says feed coming out of the Harvestore is consistent and uniform. “We know because we have tested it,” he adds. “What goes in comes out first. There is no smell and you can get seepage with a bunker. Another perk with the Harvestore is that the feed can stay in the structure for a longer period of time with very minimal spoilage penetration. Meanwhile having bags on dirt is messy, they rupture and are hard to dispose of.” Economically, Hofacker says Harvestores compare well.

“With bags, there is a throw away every year. With a bunker, feed quality can bite you. In a dairy operation you can’t afford to feed your cows poor quality feed,” he concludes.”That’s why we are sold on Harvestores. We’ve had great success with them. Haylage needs to be put in a silo, not a bunker. For us Harvestores boil down to feed quality, profitability, convenience and return on investment.”